How do you install Dutch Lap slate shingles? 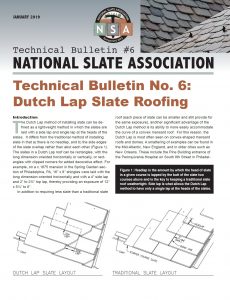 Back in March 2008, we were asked to supply our North Country Unfading Black slate for the American Brewery Restoration project in Baltimore, MD. The “Darth Vader” building as we fondly refer to was built in 1863 and Norman Gothic style architecture.  Part of the building’s charm is the detailed slate roof. The field slates supplied were 16” x 10” x Medium Texture (96 squares), 3,230 pieces of 14” x 8” trimmed to a diamond point in Unfading Black and Unfading Green.  720 pieces of 16” x 8” were supplied for the Dutch Lap to match the existing pattern on a section of the roof. 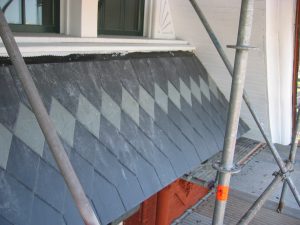 Dutch Lap slate is a lightweight method installed with a side lap, thus requires less slate. Typically, they are installed on a steep pitch, so they are able to shed rainwater quickly.  However, testing showed that during wind driven rain conditions installed with a #30 felt underlayment the roof leaked. When sourcing a suitable underlayment, you should make sure it has a service life equal to a slate roof. The underlayment should be breathable, water-repellent and able to withstand repeated dry/wet cycling. 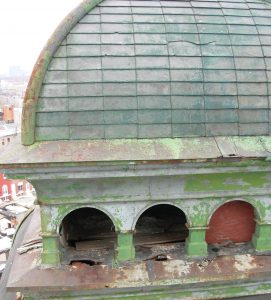 Unlike a traditional slate installation, there is no headlap, requires a cant but not necessarily a starter course. These slates are installed with the side edges overlapping with the long dimension horizontally, similar to a starter slate. When ordering Dutch Lap slates, they are ordered by the piece and in some cases will be unpunched because of the nail hole position. 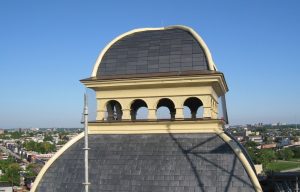 A pattern for the Dutch Lap was supplied from the roofing contractor.  The detailed drawing showed clipped corners and specific nail hole locations. Each piece was individually trimmed, and nail holes punched. By clipping the corners, it creates a decorative effect.  This installation method is also useful to accommodate the curve of a convex mansard roof. 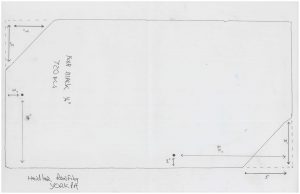