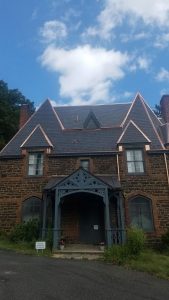 Located in the highlands of Navesink, NJ the All Saints’ Memorial Episcopal church known as “The Stone Church” was built in 1864 and the Rectory which was used as a schoolhouse was built in 1865.  In 2016, the church and rectory received a $150,000 New Jersey Historic Trust grant for the slate roof replacements.  In 2019, we supplied our North Country Unfading Black medium texture roofing slate for the re-roofs. 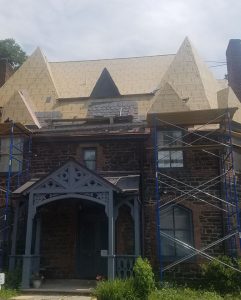 Designed by Richard M Upjohn, an American architect who joined his famous Father’s New York architectural firm at the age of eighteen is best known for his Gothic Revival style architecture.  Along with his Father, he was a founding member and president of the American Institute of Architects. 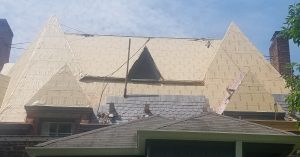 The rectory’s steep pitched roof has copper hips, dormer windows and copper snow guards.  For the slate pattern, a template of the original shape was supplied.  The slates were trimmed 2 ¾” up from the bottom and 2” in. 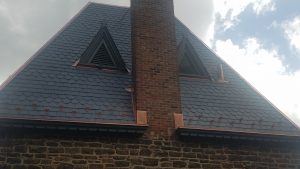 Our North Country Unfading Black Medium Textures slates exhibit a range from their targeted nominal ¼” thickness. The thickness will vary ¼” – 3/8” and one square will weigh 950-1,000 pounds. These slates offered at an economical price, offer designers and building owners a beautiful and durable roof.  Our Medium Texture slates are a fall out product from the ¼” production and availability are on a first-come, first-served basis when in stock.