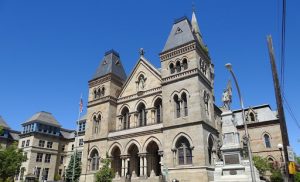 When it came time to replacing the front towers of the Blair County Courthouse in Hollidaysburg, PA our North Country Unfading Black roofing slate was a perfect match for the old Pennsylvania slate which was built in 1875. 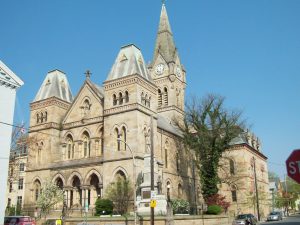 The production of roofing slate in Pennsylvania dates back to 1734, when Welsh settlers discovered the Peach Bottom slate deposit in York County, PA.  The slate can be described as dark black and is recognized for its excellent durability, these slates were known to last 200 years on a rooftop. The slate quarries in Lehigh and Northampton county of Pennsylvania, have been mined since 1840, and were known as the largest producing region in the state. This area alone produced 40-50% of the USA total slate production from 1900-1940. Known as “Penn Black” this black / dark gray or “blue black” slate ranges in durability from S1 to S2.

When trying to match any Peach Bottom, Chapman, Bangor or Pen Argyl Pennsylvania slate, North Country Unfading Black is your best choice!  The rich blue/black color has earned the admiration of slate roofing professionals, architects, contractors and building owners.  North Country Unfading Black represents the closest match to any Pennsylvania slate, especially when a smooth textured 3/16” or 1/4” slate is required.

The North Country Unfading Black is a premium quality roofing slate which meets the requirements of an S-1 rated roofing slate. Produced by Glendyne in St. Marc Du Lac Long, Quebec, Canada.  North Country Slate has been the exclusive distributor for Glendyne’s products throughout North America since 1997. Glendyne is the largest and most efficient roofing slate producer in North America.  With modern facilities and high standards for protecting their workers’ well-being and safety, Glendyne is able to maintain their high volume slate production.