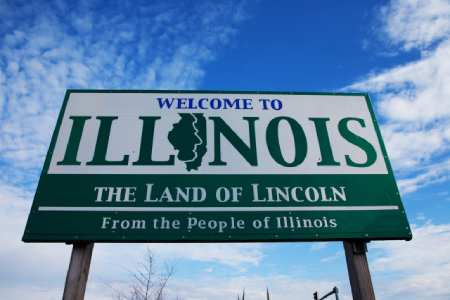 North Country Slate has been proudly serving the state of Illinois since 1997. As one of the largest natural slate roofing suppliers in North America, we work closely with architects, roofing contractors and owners of government, religious and institutional buildings assisting them in the preservation of historic structures. We also offer similar support to decision makers on new commercial and custom home projects. Our North Country roofing slate products are drawn from select quarries in Vermont and New York, and come in a wide variety of colors, textures and sizes, meeting the most demanding North American standards. One of our most popular natural slate shingles is the North Country Unfading Black slate, produced in Quebec, Canada. It has been favorably compared, by industry professionals, to the best natural roofing slates ever produced in North America. Famous for its architecture, Chicago homes vary in style. The Frame Two-Flat built from 1900 – 1920 was a bridge between apartment life and bungalows. Between 1910-1940, bungalows were built for Chicago’s working class. Chicago’s Greystone (their version of the New York brownstone) were constructed from 1890, through to the 1930’s, they were more Romanesque then Neo-Classical design. The Courtyard Building (a U-shaped courtyard building with green spaces) was constructed between 1910 and 1930. The Workers Cottage, Greek Revival and Queen Anne, were the original Chicago home styles, built as early as the 1830’s. The original homes were built of wood and after the Great Fire of Chicago in 1871, they were made of brick. Built in 1870 and inspired by French architecture of the 19th Century, The Wheeler-Kohn House is one of the last remaining mansions to have survived the Great Chicago Fire of 1871. Designated a Chicago Landmark in 1998 and listed as a National Register of Historic Places in 1999, this house is a classic example of Second Empire Architecture designed with a mansard slate roof. We supplied our North Country Unfading Black natural roofing slate for this re-roof. Lake Forest, an hour drive north of downtown Chicago, is a diverse mix of architectural styles such as French Eclectic homes which were built in the 1920’s-1930’s and feature tall steep roofs and eaves that sweep upward. Popular in the early 20th century and into the late 1920’s, was the Italian Renaissance style homes known for their symmetrical and simple appeal. Built in Midwest towns from 1850 to 1880 was the Italianate Style, known for low-pitched roofs with over hanging eaves. Bannockburn, part of Chicago’s north Shore region, was founded by Scottish Real Estate developer William Aitken, who built country estates in 1924. Our North Country Unfading Black, 16” x random width x 3/8” thick slate was supplied for a custom home in this area. Random width slate installation consists of a blend of varying widths, mixed together to display a more “cobbled” appearance. Specific to our university and college projects in Illinois, we have supplied our products to North Western University’s Levy Mayer Hall, a graduated multi-colored slate roof; University of St. Mary of the Lake in Mundelein (1,000 squares of our North Country Unfading Black slate for numerous buildings); Northern Illinois University’s Still Gym, has the popular Canadian Unfading Black slate shingles and The University of Chicago’s Bookstore and Blackstone Hall, both display our North Country Unfading Green slate roof tiles. Our church references include; St. Benedict church in Chicago, built 1917-1918, with our North Country Unfading Black slate; St. Mary’s Church in Centralia, shows our North Country Unfading Greenslate; and St. Nicholas Catholic Church in Evanston, with a heavier 3/8” thick unfading black slate roof. Our other service areas include; Barrington, Highland Park, Winnetka, Lincoln Park, Springfield, Urbana, Hinsdale, Glencoe, Inverness, Long Grove, Oak Brook, Hawthorn Woods, Lake Buff, Western Springs, Wilmette and Centralia. For more information on how we can service your Illinois slate roofing needs contact us at 1-416-724-4666 or info@ncslate.com Illinois (IL) Regions Northern Chicagoland Western Central Southwest Southern Cities Alton Chicago North Shore Champaign Rockford Chicago Pontiac Galena Oak Brook Aurora Lake Forest Springfield