Bregenzer Brothers restores 13 roof systems on The Lawrenceville School’s historic campus By Chrystine Elle Hanus Project name: The Lawrenceville School Project location: Lawrenceville, N.J. Project duration: February 2008-April 2013 Roof system types: Copper and slate Roofing manufacturers: Evergreen Slate, Poultney, Vt.; North Country Slate, Toronto; Revere Copper, Rome, N.Y. Gold Circle Awards category: Outstanding Workmanship: Steep-slope Founded in 1810 as the Maidenhead Academy, The Lawrenceville School in Lawrenceville, N.J., has established itself as a leader in academic innovation. More than 800 students in grades 9-12 attend the college preparatory school whose mission is to inspire and educate promising young people from diverse backgrounds for responsible leadership, personal fulfillment and enthusiastic participation in the world. In 1883, the school was transformed from a small proprietorial enterprise owned by each successive headmaster to being managed by the school’s board of trustees. Renamed The Lawrenceville School, the institution established many traits for which the school currently is known, including the hallmark house system and an intense school spirit. During the transition, the board asked landscape architect Frederick Law Olmsted, designer of New York’s Central Park, and Boston architects Peabody & Sterns to design the newly expanded grounds to create a strong community atmosphere. The result was the Circle – a landscaped circle in the center of the 700-acre campus surrounded by several residential houses for boarding students. In 1986, the Circle was recognized as a National Historic Landmark on the National Register of Historic Places. In 2008, The Lawrenceville School and Bregenzer Brothers Inc., Hopewell, N.J, mapped out a five-year plan to replace the slate and copper roof systems on 13 campus buildings, including all the buildings encompassing the Circle.

Beginning in February 2008, Bregenzer Brothers began its enormous task. The existing slate and copper were removed from 11 buildings’ roof systems and recycled in a nearby facility. The existing aluminum shingles on two buildings also were removed down to the wooden decks and recycled. Where necessary, deck repairs were made. Before beginning new roofing work on each building, Bregenzer Brothers met with the Historic Preservation Board of Lawrenceville to review materials and installation methods to ensure each building’s historical nature remained intact. Throughout the five-year project, more than 1,200 squares of Vermont Black roofing slate and 150-200 squares of copper were installed on rooftops across the campus. All the copper used for the project was manufactured from 95 percent recycled materials. At least 50,000 pounds of copper were custom-fabricated by Bregenzer Brothers. Honed with precision and installed to fortify the buildings’ historic nature and architectural integrity. Bregenzer Brothers also restored 59 chimneys and capped them with custom copper caps. Each building within the scope of work was unique and had its own distinctive features. “No building was the same, which resulted in every detail being custom-made to preserve the original architectural design,” says Michael Bregenzer, chief executive officer for Bregenzer Brothers. “It always was extremely challenging yet tremendously rewarding.” Following are some notable buildings and details.

An intricate copper ridge cresting and several finials make Woods Memorial Hall a prominent campus building. Duplicating the copper ridge profile was painstaking and challenging. Pieces of the ridge cresting were created off-site at Bregenzer Brothers’ workshop and put together in 8-feet lengths and crane-hoisted to the roof for final installation. Six copper finials also were fabricated to be an exact match of the original design profile. More than 200 squares of slate plus multitudes of copper ridge cresting, standing-seam copper roofing, gutters and leaders were installed on Woods Memorial Hall.

In 2009, The Lawrenceville School began a top to bottom LEED renovation on Fathers’ Building, causing the original scope of work for this building to change. Working in tandem with the general contractor and architect selected by the school’s board of trustees, Bregenzer Brothers made changes that resulted in adding dormers and nail board insulation. Additionally, Bregenzer Brothers restored the spire and clock tower, an iconic symbol for the school.

The rotunda slate roof and intricate skylight make this building visually stunning. In addition to restoring the slate roof system, the skylight was rebuilt and reglazed, and the ornate details were preserved.

The intense roof lines and rich history make this roof extraordinary. Built in 1895, Edith Memorial Chapel maintained its original slate roof until 2008, when it was reroofed by Bregenzer Brothers. While removing the original slate, crew members found pieces of slate and copper with etchings that included dates from the workers who originally installed the roof system. The findings were preserved and are on display in The Lawrenceville School’s archives.

The Circle houses include the Cleve, Dickinson, Foundation, Griswold, Kennedy, Upper and Woodhull buildings. All new slate and custom copper pieces and components, including finials, cresting, dome roofs, spires, flat-seam copper, chimney caps, valleys, crickets, gutters, leaders, standing-seam copper, dormer siding and dormer trim adorn every Circle building restored by Bregenzer Brothers. The exquisite copper work ties all the buildings together to create a beautiful masterpiece of form, function and historic value. All gutters were fabricated by Bregenzer Brothers to match the original gutters’ profiles, including distinct crown moldings. Each building’s roof system had a minimum of 20 squares of flat-seam copper roofing and crickets installed. All the Circle buildings have custom-fabricated copper dormer siding, another prominent feature throughout the campus. The Kennedy house has a cone-shaped slate roof, and each piece of slate was custom-cut to form the cone’s curves. “The cone roof on the Kennedy house is one of the features Bregenzer Brothers is most proud of,” Bregenzer says. “We installed the gutters around the cone to follow the curve, creating an outstanding key element on the Kennedy house and a focal point for the campus.” The Kennedy house was the first house to receive its custom house flag. The flag sits atop a copper finial hand fabricated by Bregenzer Brothers on the cone roof. Flags also are displayed on the Woodhull and Griswold houses.

Challenges Along The Way

Bregenzer Brothers overcame many obstacles throughout the roof system restoration project. During work on the Griswold building, Hurricane Sandy made an appearance. Before the storm, Bregenzer Brothers secured all scaffolding and materials to brace for the coming hurricane force winds that were upwards of 90 mph. “We were able to secure the work area and reinforce the temporary roof that was in place,” Bregenzer says. “We made it through the storm with no damage reported.” More challenges in the days and weeks that followed the hurricane included massive electricity failures, uprooted trees and decreasing mobility in the area, making it difficult for work to progress. Also challenging was working though the school’s scheduling constraints. Woods Memorial Hall is a classroom building, and work needed to be performed during only the summer months when school was not in session. Accordingly, it was necessary for Bregenzer Brothers to complete the hall’s slate roof system installation in 10 weeks. Adding to the 10-week challenge, New Jersey broke records that summer for high temperatures. Crew members had to persevere through strenuous heat to complete the roof system installation on time before students returned for the fall semester. “During the summer of 2010, we experienced one of the hottest summers on record,” Bregenzer says. “We often needed to work early in the morning so we could be off the roof by 2 or 3 p.m. I am thankful our crew was willing to do whatever it took to get the job done safely and in a timely manner. I also am happy to say we finished within the allotted timeframe and the school was extremely grateful.”

In April 2013, Bregenzer Brothers successfully completed the school’s massive roof system restoration project without a single workplace injury. Throughout the five years, crews of four to 10 workers overcame a hurricane, extreme heat, scheduling constraints and changes to the scope of work. Thanks to Bregenzer Brothers’ technical artistry and craftsmanship, The Lawrenceville School can celebrate a bicentennial milestone and enter its third century of inspiring and educating students knowing the school’s structures will remain strong and grounded in architectural history. “What continues to be the most rewarding part of the job is to drive through The Lawrenceville School campus and reflect on the beautiful architecture knowing it has been preserved as a result of our hard work, attention to detail and dedication to maintaining the historic integrity of each building,” Bregenzer says. “When members of the local community see our crew, they often comment they enjoyed watching the daily progress and seeing the finished project. It is nice to know our detailed workmanship is appreciated and will be part of the campus for years.” For its efforts to restore The Lawrenceville School’s roof systems, Bregenzer Brothers received a 2014 Gold Circle Award in the Outstanding Workmanship: Steep-slope category. Chrystine Elle Hanus is Professional Roofing’s associate editor and NRCA’s director of communications. 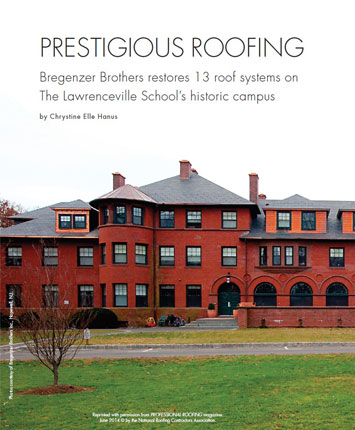