North Country Slate has been servicing the Maryland slate roof shingle market for over 20 years in partnership with local qualified slate roofing contractors who are operating at the top of their game. These contractors have a proven track record in providing quality slate roofing installations, maintenance and slate roof repairs. Notable slate roof projects completed in Maryland include the restoration of the venerable B & O Railroad Museum building with our North Country Unfading Black, the repurposing of the American Brewery Building, under a neighborhood revitalization program, with our North Country Unfading Black and North Country Unfading Green slate roofing tiles. We are also very active in the historic and architecturally controlled residential neighborhoods of Guilford, Roland Park and Homeland. Regularly supplying Unfading Black, Gray/Black, Strata Gray and Vermont Black slate to these north Baltimore city communities. Our North Country Unfading Black roofing slate in particular has been very well received in the region as a quality slate shingle replacement for the famous Peach Bottom black slate that adorns many of Maryland’s most treasured buildings. It is also a quality replacement for the many other Pennsylvania slates that are common in the state. Current production of most Pennsylvania quarries is now either much diminished or ceased. Look for North Country Slate roofs in Baltimore, Laurel, Brunswick, Overlea, Prince Frederick, Gaithersburg, Dickerson, Towson, Potomac, Cottage City, Bethesda, Centreville, Aberdeen, Chestertown, Reisterstown, Annapolis, Cockeysville, St. Michaels, Gibson Island, Glen Burnie, Beltsville, Catonsville, Pikesville and Port Deposit.

Project Profile: B & O Railroad Museum By Josephine A. DeLorenzo I admit that my first exposure to the B&O Railroad was through the Monopoly board game. But subsequent history lessons revealed that there really was a Baltimore & Ohio Railroad Co. For a brief refresher course, here is what TheFreeDictionary.com has to say: “The Baltimore & Ohio Railroad, or B&O, was a 19 century railroad that operated on the East Coast of the United States and was the first railroad to offer commercial transportation of both people and freight. It was incorporated on February 28, 1827. The Chesapeake & Ohio Railroad, or C&O, took control of the B&O in 1963 and incorporated it, along with the Western Maryland Railway, into the Chessie System, in 1973. In 1980, the Chessie System merged with Seaboard System to create CSX. In 1984, the B&O finally went out of existence when it formally merged with the C&O, which itself formally merged with CSX later that same year.” But never fear, while the B&O Railroad Co. may be history, today there is a B&O Railroad Museum in Baltimore. The building itself was constructed in 1884 and is listed on the National Historic Registry. It became the B&O Transportation Museum on July 2, 1953. According to the museum’s Web site (www.borail.org) this free museum exhibited the B&O collection of historic equipment and replicas, as well as parts of an 1893 exposition, public relations exhibits and artifacts.

Built in a roundhouse style, the 46,000-square-foot, 22-sided building is 245 feet in diameter. Inside the museum are 22 “stalls,” which are bays with storage tracks that display historic locomotives and cars. Unfortunately, over President’s Day weekend in February 2003, a major storm dumped 28 inches of snow in the area and the museum’s roof collapsed. The building’s roof system sits directly on top of a 2-foot thick, 25-foot-high brick wall and has four distinct parts: lower roof, clerestory, upper roof and lantern. The section that fell was fully half the lower roof, covering the storage bays for the trains. Most of the collapsed roof fell on 19th century train cars, which are among the museum’s most rare. In the summer of 2003 after the debris from the collapse was removed, Roofers Inc., a generalRoofing company, was contracted to do the roof reconstruction. Located in Baltimore, Roofers Inc. has been around since 1951 and became part of generalRoofing six years ago. Roofers Inc. works with all types of commercial systems: BUR, TPO, EPDM, slate and standing seam, and does waterproofing as well. “We got involved in the job because we have a strong relationship with Whiting-Turner, the general contractor,” says David Ikrath, president of Roofers Inc. He has been with the company for two years. “And our previous work speaks for itself.” This generalRoofing company has done many important, high profile jobs including the Old Executive Office Building, in Washington, D.C., for which it won a first place Gold Circle Award from the National Roofing Contractors Association in 1996. The company has also worked on the east and west wings of the White House and is currently involved in a project on the FTC building. Roofers Inc. worked with Whiting-Turner in the design phase of the museum reconstruction. It then came in as the low bidder and was awarded the carpentry and roofing subcontract. Work began about three months after the collapse and the project has taken more than a year to complete. The museum is expected to reopen this month (November 2004). To get an idea of what crews were up against, it helps to understand the roof structure. The lower roof makes up about 80 percent of the total area. Built on a 6:12 slope, it consists of steel trusses, multiple layers of glu-lam wood timber, tongue-and-groove decking and random-pattern ¼-inch-thick slate tiles in two sizes: 22 inches by 10 inches and 22 inches by 14 inches. The base of the lower roof is accented with a wood cornice. The clerestory rises 15 feet vertically from the top of the lower roof and is constructed of tongue-and-groove walls and three enormous windows per bay. The top of the clerestory also features a wood cornice. The upper roof sits on the top of vertical steel columns and the clerestory. It is constructed in the same manner as the lower roof except that glu-lam wood timbers are used instead of steel trusses. Finally, the lantern rises 13 feet vertically from the top of the upper roof and is constructed of tongue-and-groove walls and 22 individual windows (one per bay). The vertical rise of the lantern is also terminated with a wood cornice. The peak of the lantern is topped with a lead-coated copper cap whose skeleton is assembled of wood plank. To meet the restoration challenge, Roofers Inc. sent a crew of 10 roofers and 12 carpenters to work on the project. They began immediately to brace the remaining roof structure-which was under tremendous stress-to prevent further damage. After Whiting-Turner installed new bar joists, Roofers Inc. was able to put in all the lumber. Crews managed to salvage materials from the debris (such as brick and metal) in order to maintain the authenticity of the building. In the first phase of the project, Roofers Inc. rebuilt and replicated nine of the 11 bays that had fallen during the collapse. Then crews had to reconstruct the remaining bays of the 440-square lower roof by removing slate and dismantling the timber structure, two to three bays at a time. After this process, Roofers Inc. built a new timber roof structure on the steel beams. The resulting structure comprised king-and-queen post trusses constructed of glu-lam beams and cast iron stand-off posts, wood purlins, and 5/4-inch beaded tongue-and-groove board. The next step was in install new random patterned ¼-inch thick slate. The unfading black slate used on the project came from North Country Slate, Toronto. David Large of North Country Slate explains that the architect was looking for a slate close to the museum’s original high-quality “Pennsylvania peach-bottom” slate, which is no longer available. After North Country Slate was chosen, Large worked with the architect, general contractor and Roofers Inc. to make the tight delivery schedule. The company delivered a total of 550 squares of slate for the project. Large visited the site twice during construction to make sure everything was going smoothly. The slate used on the project needed to be a unique size: 22 inches by 10 inches and 22 inches by 14 inches. “It’s a hard size to get without curves,” explains Dean Jagusch, estimator and project manager for Roofers Inc., “but North Country Slate did it.” The slate was installed over two layers of 30-pound felt and self-adhered membrane at the perimeters. Crews from Roofers Inc. also had to:

“Overall, work on the lower roof was smooth and stayed on schedule,” says Ikrath. But then came a slight twist: Structural engineers examined the integrity of the upper roof and lantern and, after evaluating several other options, decided that they too would have to be completely rebuilt. Ikrath notes that Roofers Inc.’s contract, which started at $1.8 million, ended up at $4 million. For this next phase of the project, crews had to deconstruct and remove the entire clearstory structure, including all beams, trusses, purlins and slate roofing. They then had to reconstruct the entire upper roof to match the original. This included new king-post truss beams, saddled beams, purlins, 5/4-inch tongue-and-groove decking plywood overlay, and a new cornice. The upper roof was then rebuilt in the same way as the lower, with the same product from North Country Slate, copper flashings, snow fence, etc. Roofers Inc. moved on to finish all the window framing and trim, so that the structure was ready to receive the new lantern – a 20-ounce lead-coated copper dome-the final piece. “We cut it off (the original), brought it down on the ground and used it as a model to build a new one. It’s an exact replica,” says Ikrath. Crews then flashed the new dome, rebuilt the existing interior clerestory catwalk, and installed 108 new double-hung wood framed windows at the ground level, clerestory and lantern to finish the project.

Overall, “This job couldn’t have gone any better,” says Ikrath. “The GC was happy that it made the right choice.” Why is Roofers Inc., a generalRoofing company, so successful? We preach quality and craftsmanship to our field personnel,” says Ikrath. “We care very much about the finished product, stressing quality and safety over production.” Ikrath adds that it helped to have the right people on the job. “Ron Kuhar was our superintendent on this job, and he has been with company for 15 years,” he explains. Roofers Inc. is able to keep its employees because, “We care a lot about them,” says Ikrath. “Field employees are what make a roofing company what it is.” Josephine A. DeLorenzo is editor of Roofing Contractor. Published in Roofing Contractor, November 2004. 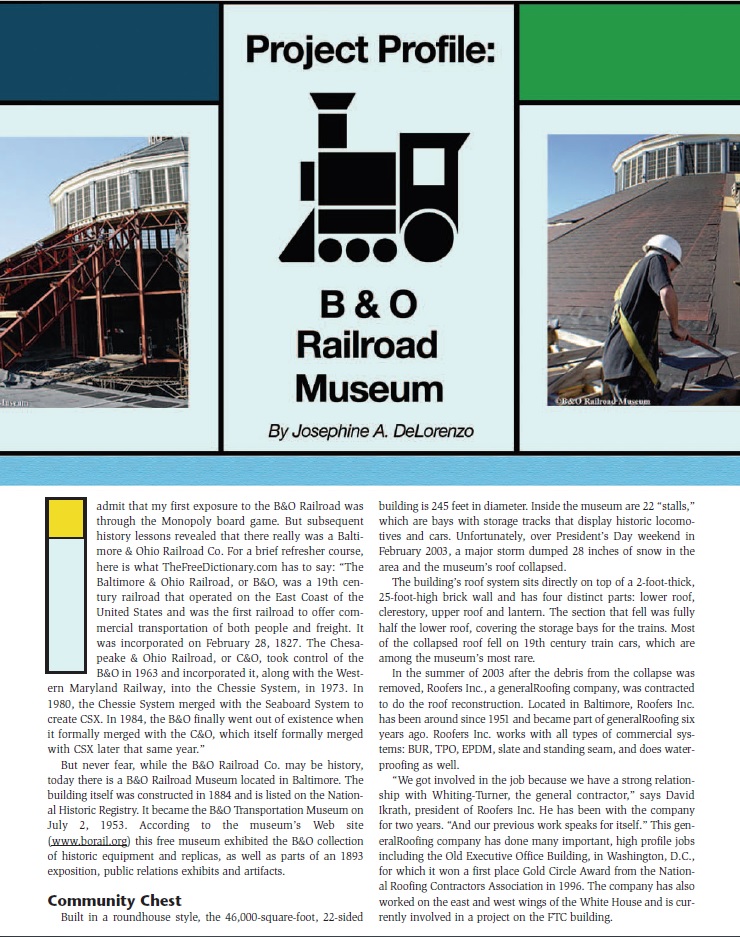