The province of Quebec is home to our North Country Unfading Black quarry, the famous “Canadian” black slate, and North Country Slate shingles of all colors have been supplied for roof restorations and new construction projects across the province. Buildings at McGill University and Bishop University are adorned with North Country Slate roofs. St. Patrick’s Church, Eglise St. Philippe, the Church of St. James the Apostle, Eglise Evangeliste, and numerous other houses of worship are sheltered by North Country natural slate shingles as well. Working with the best local architects, custom homebuilders and qualified slate roofing contractors, countless homes in the upscale neighborhoods of Westmount, Outremont and Mont Royal have been equipped with spectacular custom slate roofs in North Country Slate black, green, gray, purple and mottled slates from our exclusive Quebec quarry and the finest quarries of Vermont. With inventories held at both our Quebec quarry and our Toronto distribution center, we are well equipped to provide quick and reliable delivery to projects province wide. Support in person from our technical representative, John Neil, is only a phone call away and backed up by our Montreal based sales agent. Both are well equipped to be of assistance to architects, designers, restoration professionals, and custom home builders regarding all aspects of slate roofing. Look for North Country Slate roofs in Montreal, Magog, Sherbrooke, Mont Royal, Laval, Lorraine, Point Claire, Beauport, Chatham, Quebec City, Ste. Julie, Gatineau, Cowansville, Dorval, Mont Tremblant, Ile Bizard, Harrington, Victoriaville, Westmount, Rosemere, Brome, Chambly, Outremont, Stanstead, Ulverton, Verdun, Frelighsburg, L’Assumption, Boucherville, Old Montreal, and St Bruno de Montarville.

The Windsor Hotel in Montreal, QC was constructed between 1876 and 1878 as a luxurious new hotel to symbolize the city’s growing prominence. Its Second Empire architecture style quickly made it one of Canada’s most impressive buildings. A nine-story structure made of sandstone, granite and a slate roof played host to an array of guests and celebrities, including Mark Twain, Winston Churchill, King George VI, Queen Elizabeth II and John F Kennedy. The famed Montreal Canadians hockey team was founded on November 1917, during a meeting at one of the hotel restaurants and shortly thereafter the owners of the Montreal Canadians, Quebec Bulldogs, Montreal Wanderers and the Ottawa Senators founded the National Hockey League (NHL). On December 10th 1957, a fire devastated the hotel for the second time during its existence and all that remained was its 1908 North Annex section – an original part of the hotel that still stands today. After the fire The Montreal Star wrote: “for a moment it seemed that Montreal’s heart stopped beating… The Windsor has been close to the heart of Montreal geographically, spiritually and socially since the day it opened”. After closing its doors in 1982, the Windsor Hotel went through a $40 million transformation into a prestigious office building and in 1987; its name was changed to ‘Le Windsor’. In 2014, a complete restoration of the mansard roof was designed by DMA Architects; the work involved completely replacing the copper elements of the roof as well as replacing the asphalt shingles with slate along the entire perimeter of the building. During the 1990’s the original slate roof had been replaced with asphalt shingles and it was now time to restore this magnificent buildings mansard roof to its original glory. Approximately 12,000 sq. ft. of North Country Unfading Black 14”x10”x1/4” smooth textured slate was supplied. The slate size was carefully selected to help ensure an adequate installation over the convex mansard roof. The INOVA Awards from the Urban Development Institute of Québec (UDI) reward the talent of those who contribute and enhance Québec’s expertise in real estate. These Awards honour innovating projects, having a positive impact for their community in commercial, residential, industrial and public services sectors. In October 2016, Le Windsor rehabilitation project was awarded for the commercial sector designation for innovating projects’ with construction costs of less than $50 million. The combination of Canadian produced slate and elaborate copper work will continue to keep ‘Le Windsor’ atop Canada’s most impressive and historic buildings for many more years to come! 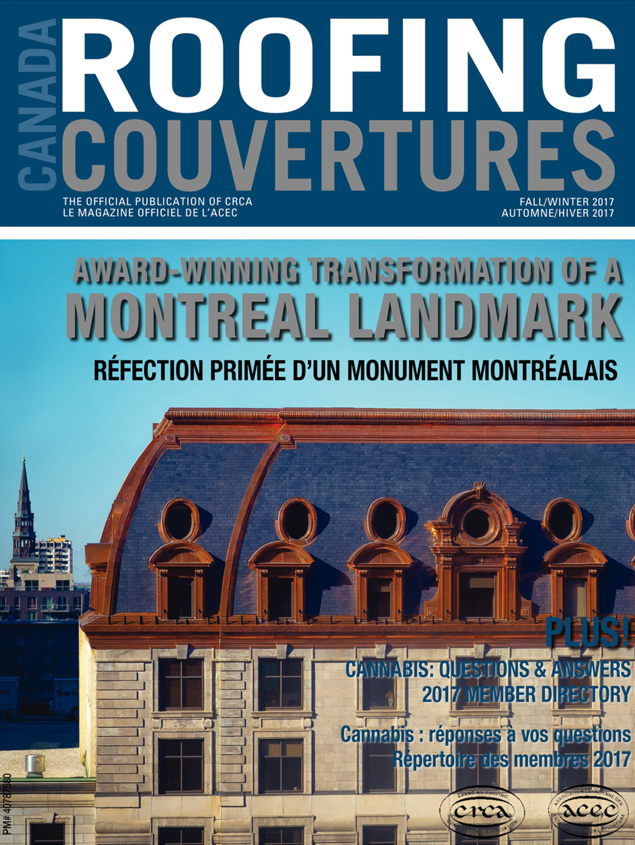