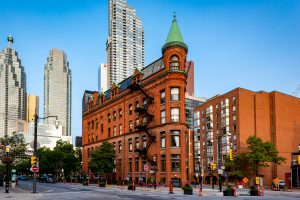 Gooderham Building (Flatiron Building) is one of the most photographed historic buildings in Toronto.  Located in Toronto’s St. Lawrence Market neighbourhood, this unique red brick building was built in 1892 for distiller George Goodman Sr, a son of the Gooderham and Worts founder. 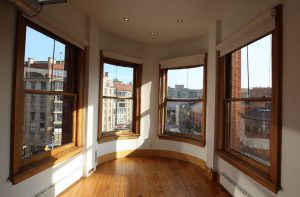 Mr. Goodman’s office was located on the top floor, where he could see his ships in the harbour, trains on the Esplanade, as the President of the Bank of Toronto he could see his employees going to work and also a view of his distillery which was the largest producer of spirits in Canada back in the day. 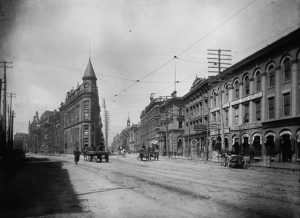 The Flatiron Building was sold by the Gooderman family in 1957 and has since been sold several times. In 2011, it sold for over $15 million dollars to The Commercial Realty Group known for preserving several Toronto heritage properties. 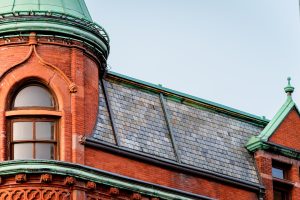 Over the years the building has undergone much needed restoration work.  Our North Country Unfading Black roofing slate was supplied for the partial mansard re-roof.  For more information on matching an old slate roof check out our Slate Roof Design and Installation for Architects under the Design Support tab.