Roofing on a Curve

Ruff Roofers Inc., Baltimore, was selected by the general contractor, Bovis Lend Lease Corp., Washington, D.C., to restore Gilman Hall’s three historic copper roof systems: batten-seam copper panels on a gable roof, curved copper standing seams over barrel roofed dormers and flat-seam copper panels on a dome. The batten-seam copper roof system covers a gable roof flashed into brick walls. All copper for the project was provided by Revere Copper Products Inc. Each piece was produced in 10-foot lengths to replicate and maintain the historic method of fabrication sheet-metal roof panels. Modern fabrication methods allow greater panels lengths; however, Ruff Roofers crafted the panels in the same historic manner the original panels had been crafted. The batten seams of each roof panel were folded in a consistent manner, and each pieces of stepped wall flashing was individually cut and shaped by skilled copper tradesmen to produce a clean finished product. Ruff Roofers’ workers demonstrated great care and precision in the panel layout. Using hand tools, the transverse joints were aligned in a symmetrical pattern, and the batten ridge joints are meticulously neat and uniform. The curved copper standing-seam roof system is on barreled roof dormers. Tearing off the copper dormers to wood deck required careful staging to avoid damaging the surround slate during removal and installation. Twenty standing-seam copper barreled dormers were roll-formed in Ruff Roofers’ shop. Each panel then was custom-curved to fit dormers. Attention to joint placement was essential to the finished appearance. Single panels were curved and straight to fit the dormer shape without the need to place a joint at the point of tangency. Precision field measuring and fabrication were key elements to producing a neat finish on every dormer. Perhaps the most impressive work was performed on the copper dome. Each panel was custom fabricated by hand and fitted for the stepped dome. Flat-seam joinery was used to unite the panels and soldered where required because of the multitiered dome’s slope. Careful layout of the seams prevented a bond-over-bond condition. An improved joint design on the decorative copper belt eliminated the existing exposed fasteners, which had created points of water entry, by using concealed fasteners. Careful attention to the layout of each panel contributes to the elegance of the finished roof system. “The symmetry and balance of the joints is evidence the panels were installed by artisans who take pride in their work and craft,” says Tim Caldwell, P.E., Ruff Roofers’ general manager. “Most of the joints are not visible to casual observers, but that didn’t matter to the craftsmen who installed the panels as if they would be plainly observed like floor tiles on a main foyer.” The copper built-in gutter at the dome’s base did not have a provision for thermal movement. Ruff Roofers corrected the design flaw and integrated an expansion joint without changing the gutter’s profile and appearance. The dome panel’s upper courses were soldered for weatherproofing purposes where the dome slope was less than 3:12 (14 degrees).

In addition to the copper work, repairs were made to slate and membrane roof systems. Slate roof system work consisted of limited replacement of missing or damaged slate. In some areas, individual pieces of slate needed to be removed without damaging adjacent slate. In other areas, large areas of slate were removed and replaced. Random locations of repairs required precise fitting and color blending to avoid unevenness of sizes, gaps and colors on the mottled purple and green, random width, graduated slate roof system. Slate was provided by North Country Slate. Polymer-modified bitumen sheet membranes were removed from the low-slope roof system’s multiple roof profiles: one wood deck, two steel decks and four concrete decks. The low-slope roof system was replaced with a Sure-White EPDM Roofing System manufactured by Carlisle SynTec Systems, and the terraces received a Bituthene 3000 waterproofing membrane manufactured by Grace Construction Products.

Getting materials to the site was difficult. All trades working on Gillman Hall had to share a crane. Careful planning and coordination was necessary to be sure all materials were on-site when sections of the roof systems became available for Ruff Roofers to commence work. In addition, all debris needed to be hauled by hand to a staging area where debris chutes were located. Some debris needed to be removed by crane from a single staging area on the building’s north side. Because of the crane’s limited reach and availability, careful planning was necessary to prevent damage to completed roof systems and an accumulation of debris. Ruff Roofers removed only the materials it could replace in a day, or in some areas, a temporary roof system was used to expedite production and eliminate the conflict of storing new materials in the path of work. In addition to daily material access challenges, there was an issue with the roof system design and performance requirements. The building is FM Global-insured and needs to meet stringent requirements for fire and wind resistance. Six roof areas needed to meet FM Global requirements. Five of the six met the requirements for two RoofNav-listed roof assemblies, but the sixth roof assembly did not comply because of its wood deck. Ruff Roofers proposed an alternative design that eliminated the wood deck and used tapered insulation to provide slope, which could be installed directly on the existing concrete deck. After three months of due diligence, FM Global approved the new design that met performance requirements without sacrificing design requirements.

Work began in May 2009 and was completed in January 2010. Although the beauty of Ruff Roofers’ work is visible for all to enjoy, what isn’t apparent is Ruff Roofers completed the work without incident or accident, on schedule and within project budget. The copper roof work on Gilman Hall provides a stunning example of three different types of copper roof systems. Copper is considered a classic building material because of its beauty, longevity and adaptability, but without the hands and skills of artisans, it is nothing more than a piece of sheet metal. “Ruff Roofers’ skill in metal work upholds the historic tradition of the trade,” says Alex Diez, AIA, LEED AP, partner with R.M. Kliment & Frances Halsband Architects. “The most rewarding part was contributing to a diverse team of professionals and craftsmen who have many talents from different backgrounds,” Caldwell says. For its exceptional efforts on Gilman Hall, Ruff Roofers received an NRCA Gold Circle Awards honorable mention in the Outstanding Workmanship: Steep- slope category. Chrystine Elle Hanus is Professional Roofing’s associate editor and NRCA’s director of communications. Published in Professional Roofing’s – August 2012. 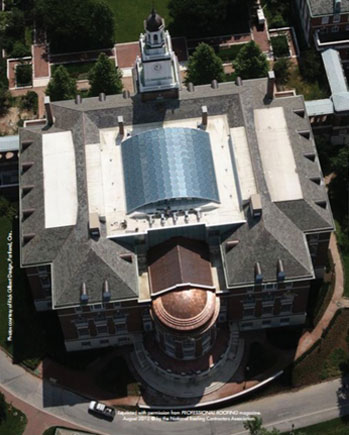