Midland Engineering revives The Cathedral of St. Paul’s neo-gothic design By Chrystine Elle Hanus Project name: The Cathedral of St. Paul Project location: Birmingham, Ala. Project duration: November 2013-October 2014 Roof system type: Slate with copper elements Roofing contractor: Midland Engineering Co. Inc., South Bend, Ind. Roofing manufacturers: Hussey Copper, Leetsdale, Pa.; North Country Slate, Toronto Gold Circle Award: Outstanding Workmanship: Steep-slope category The Cathedral of St. Paul in Birmingham, Ala., originally was a 30- by 60-foot wooden frame building build in 1872. In January 1880, land on an adjacent lot was purchased, and in May the same year, a rectory was built and the church was moved and enlarged on the new property. The cornerstone was laid June 11, 1890, and the new building was dedicated Nov. 30, 1893; it cost $90,000 to construct. The cathedral is widely considered a picturesque example of American Neo-Gothic style. Its strong contrast of red brick and white limestone and polychromatic banding in the slate roof reflect the international Gothic Revival mood of the 1870s. The exterior now measures 96 by 140 feet and encompasses 60,000 square feet with twin octagon spires rising 183 feet. In 1955, the church was extensively renovated and air conditioning was installed. In 1972, the church underwent structural repairs, and the sanctuary was remodeled. In 1992, exterior and interior ramps and doors were added to provide access for all to the church. And in 2013-14, the roof system was renovated by Midland Engineering Co. Inc., South Bend, Ind.

When the Catholic archdiocese of Birmingham, Ala., initiated plans to renovate The Cathedral of St. Paul, it had one clear requirement for the new roof system: It must be a historically accurate reproduction in materials, design and craftsmanship of the original roof system being replaced “We knew from our inspection of the original roof system when preparing our proposal that The Cathedral of St. Paul would be a unique and challenging project,” says Jay Seniff, project manager for Midland Engineering. “Recreating the ornate Gothic Revival style to the original exacting detail expected by the archdiocese would require a level of craftsmanship encountered on few projects.” With approved prints and scaffolding in place, work on the roof systems began in November 2013. Extensive termite damage to the structural framing required repair before the new roof systems could be installed. While a subcontractor made the necessary structural repairs, Midland Engineering workers began documenting and removing all architectural and functional features from the main roof and steeples. As a result of thinning metal brought about by advanced age, every copper architectural and functional feature incorporated into the existing roof system had to be carefully removed and shipped 700 miles to Midland Engineering’s South Bend, Ind., facility to be replicated in its off-site metal shop. This included seven ornate copper crosses ranging from 3 to 17 feet tall, including bases; 16 ornate 5-foot-tall copper finials; 12 customized copper dormer louvers; four copper turret caps; 16 customized copper rainwater collection boxes; a lead-coated copper chimney cap; and other components for which no original prints existed. Before fabrication and installation, Midland Engineering workers provided full-scale mockups for each type of copper architectural and functional feature for quality assurance and approval. More than 20,000 square feet of 16- and 20-ounce copper was used for custom-fabricating architectural elements and flashing, including a 500-foot-long cornice and more than 500 feet of customized copper radius gutters with expansion joints and matching straps. Midland Engineering metal workers also clad 10 previously painted windows and mullions in copper, eliminating frequent and costly maintenance. These windows only are reachable by crane at considerable expense and previously required painting and other maintenance every five to seven years. The off-site detailed copper fabrication work continued for the duration of the 11-month project while Midland Engineering’s onsite crew worked on the slate roof system.

After removal of the original slate roof and completion of structural repairs, Grace Ice & Water Shield was adhered to the deck. Workers then began work on the slate roof. Unlike a typical single-color, square-edge slate roofing project, The Cathedral of St. Paul’s intricate slate tile patterns incorporated three slate colors in a variety of square and deep-bevel cut tiles. Six large crosses and multiple accent patterns, barely visible on the faded, original roof, required exacting measurements before tear-off and a high level of precision to recreate and maintain over such a large roof field and octagon steeples. For quality assurance and approval before installation, Midland Engineering workers prepared a 1-square mockup representative of the standard and deep-bevel cut slates in two colors that would compromise the six crosses in the main roof’s design. Mitered hips of the apse made layout of the pattern difficult because each segment was a trapezoid and not a triangle. All slate on the steeple and apse were hand-cut to produce the mitered hip. The cathedral’s east and west walks also were clad with New York red slate. div class=”head4″>

Scheduling the installation of the copper features and slate tiles was challenging from the beginning. The contract stipulated parishioner and clergy access to the church must be maintained 24 hours a day, seven days a week throughout the project’s duration. “The Cathedral of St. Paul is a large church with many activities occurring daily,” says Lyle Bandurski, project foreman for Midland Engineering. “We had to coordinate regularly with the church staff on where and when we could work. The significant amount of termite damage that had to be remediated also changed our schedule and manpower needs on a regular basis.” Because of the noise inherent in roof construction, work schedules had to be planned around regular church services and events and rescheduled several times per month for funerals and other unscheduled events. “The Midland Engineering team did an outstanding job of keeping our property as neat, presentable and safe as possible, even in the midst of such a massive scope of work,” says the Very Rev. Kevin Bazzel, VG, JCL, rector for The Cathedral of St. Paul. “Not only was the property completely safe throughout the duration of work, there never was a time when people had to approach the church through major disarray or grime. It was clear the Midland Engineering team was most vigilant to this crucial detail.” div class=”head4″>

Midland Engineering also was tasked with upgrading the roof system to improve attic ventilation while maintaining the look of the Gothic Revival period. To accomplish this, workers integrated bronze screen, which is invisible to see from the ground, into the original copper cornice and eave design to provide improved cold-air intake. New louvered copper dormers also replaced the original roof ventilator. An updated lightning protection system also was incorporated into the new roof system design and was hidden within many of the new copper crosses and other architectural elements fabricated in Midland Engineering’s shop, maintaining the project’s crucial element of keeping the church’s original design. Lead-coated copper, which patinas to a limestone color, was used to cap all limestone exposed to weather, reducing ongoing maintenance of limestone joints. div class=”head4″>

A Marvel To Behold

After overcoming numerous scheduling and historical accuracy challenges, Midland Engineering completed its work on The Cathedral of St. Paul in October 2014. The off-site and on-site teams worked diligently and meticulously for months to maintain the historical accuracy of multiple architecture elements, resulting in a gorgeous and reinvigorated church design updated with modern technology. “The team’s work in piecing together such an intricate weave of slate and copper to restore our church’s beauty and keep it safe from water was such a marvel to behold,” Bazzel says. “And now our parishioners and our city can see the roof and all the copper appointments in the same way as it was seen in 1893. It is a marvel to us to be able to see the church in its original glory, and all thanks to Midland Engineering!” For exceptional efforts on The Cathedral of St. Paul, Midland Engineering received a 2016 Gold Circle Award in the Outstanding Workmanship: Steep-slope category. “The most rewarding part of the project was seeing the pride and joy daily from each of our craftsmen who worked on the project,” says Mike Kite, sheet metal manager for Midland Engineering. “Every one of them was so proud when this project was awarded the NRCA Gold Circle Award.” Chrystine Elle Hanus is Professional Roofing’s associate editor and NRCA’s director of communications. 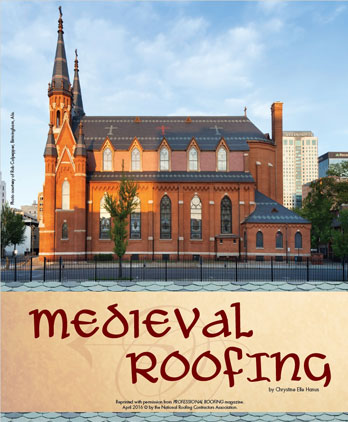