Centennial Roof by Rick Damato James Edward Oglethorpe arrived in Savannah, Ga., in February of 1733 as the visionary who would later be credited as the state’s founder. Part of Oglethorpe’s vision was laying out the city of Savannah in a series of squares. Most of those squares survive today and account for much of the uniqueness that attracts thousands of visitors to this picturesque river city near the sea.

SLATE ROOFING IN THE SOUTH

Construction styles around Savannah vary since the city has grown slowly in comparison to others in the region. Some things that are uniquely Georgian can be found in abundance here, including imposing columns, Georgia marble, red brick from the indigenous red clay, and slate roofing. Slate is about as far from indigenous as you can get from South Georgia, but this is an area whose architecture grew not only from locally available materials, but also from the shipping trade with the Northeast. This seabridge to the south enabled Savannah’s economy as a port city and enhanced the availability of building materials from the North – with the exception of the time around that unfortunate misunderstanding in the 1860s, that is. A wonderful example of a building with slate roofing is the Cathedral Church of the Catholic Diocese of Savannah, St. John the Baptist Cathedral. The Cathedral, located in downtown Savannah on the corner of one of Oglethorpe’s squares, is going through a 100-year renovation. Inside and out. Roofing Contractor accepted an invitation to visit this fascinating retrofit job as it was underway this year. The exterior portion of the renovation included removal and replacement of all the slate on the main buildings, along with all the copper trim, flashings, terra cotta fixtures and gargoyles. The stained glass windows were also removed and rehabilitated. To aid in the completion of the work, the general contractor, Rives E. Worrell Co., hired Brand Scaffolding to erect scaffolding around the entire work area, including the twin steeples that are signature of this beautiful structure. The scaffolding, at a cost of around $1 million, was needed to accommodate the many trades working at all the same time. It was also needed to deal with the building’s very limited access due to its location on the square with narrow streets and close proximity to adjoining structures.

The roofing contractor for the Cathedral job is Allen Lancaster Jr., president of Metalcrafts Inc. of Savannah. Lancaster is a second-generation roofing contractor. Metalcrafts Inc. was founded as a metal fabrication company on Friday the 13th, August of 1968 by Lancaster’s father, Allen “Tommy” Lancaster Sr., and three uncles, E.J., Pete and Lem Lancaster. Metalcrafts went into the roofing business at the end of 1969. Tommy was the last of the former generation to leave the business when he retired in 1997. Metalcrafts presently does roughly 40 percent of its volume in built-up roofing and modified-bitumen roofing, and around 15 percent single plies, mainly EPDM and TPO. The remainder of the firm’s volume comes from metal work, coatings and other steep-slope roofing. Allen Lancaster oversees the overall operations of the firm and is also quite active in his community and the roofing industry. He serves the National Roofing Contractors Association as chairman of the Metal Roofing and Sheet Metal Committee, and also works on the Committee on Manual Update, the Technical Operations Committee. This summer he made a bold and respectable, yet ultimately unsuccessful, run for a county commission seat in his home county against a 10-year incumbent. We suspect this may be just the beginning of his political aspirations. The Cathedral job, in addition to being the renovation of a historical structure, holds special meaning for Lancaster as a member of the Catholic Church. The Cathedral is not his regular place of worship, but is the “Mother” church of all the Catholic churches in South Georgia. His involvement in this job is very much a labor of love along with being a considerable contract. The base contract, just under $1 million, consisted mainly of removal and replacement of slate roofing and copper trim and flashings. It also included some MB roofing, and terne-coated metal roofing (TCS II by Follansbee). The slate “North Country Unfading Black,” was furnished by the quarries of North Country Slate of Scarborough, Ontario, Canada. This particular stone was chosen for its match of existing color and quality. The specifications called for the finest roofing slate available, whose characteristics were required to exceed the ASTM S-1 standard. This slate had to be relatively free of offending mineral content, such as iron pyrite, and had to be unfading to a fault. We will not know for another hundred years or so if this slate is able to perform. However, allowing that this is the editorial comment of a non-expert in slate, the product on this site did have all the appearances of the finest quality roofing slate. It was very well packaged (neatly and evenly stacked in crates); had a crisp, resonant “ping” when tested with a hammer; and had a very smooth face and a smooth, even color. The cut was crisp and even. This look is not desired in some cases where random color and size is required, but for this job, the slate was just what the architect ordered. The original contract called for a #30 asphalt-felt underlayment, but Lancaster negotiated the use of a self-adhering underlayment by CertainTeed instead. This allowed for one application of underlayment that would keep the building dry through long delays in construction. Using regular felt would have required re-felting a number of times during the course of the job. The real bonus, according to Lancaster, is a superior underlayment for little extra cost. Metalcrafts was the prime, but not the only, roofing contractor on this job. Metalcrafts people handled most of the logistics on the job and all the metal work. Lancaster chose to sub-contract the installation of the slate to John Kalkreuth of Kalkreuth Roofing and Sheet Metal Inc., Wheeling, W.V. Lancaster met Kalkreuth through their mutual work on committees for NRCA. Slate is a specialty for Kalkreuth, and this job had plenty of it.

The installation of the slate was fairly standard with only a few exceptions. Matching the original design of the building, on the sloped portions of the roof over the nave, rows of “scalloped” slates were installed. These slates were ordered from North Country pre-cut into these patterns, which added a bit of grace to the finished product, and another level of difficulty for the installer. The most unique installation, however, involved the twin steeples. Here, installation of the slate was done with workers on the inside and outside of the steeples. Each slate was literally “hung” on crossbars using a pair of copper slating nails. There was no sheeting and no underlayment on the steeples. The nails were bent over on the inside, which allowed them to remain in place for the rest of the installation. Once in place, a heavy copper wire was used to “hook” the bottom of the slate, tying it to the structure. From the inside of the steeple, the Kalkreuth mechanics coated the back of the mechanically fixed slates with a cement mixture, bonding them together. (Getting water for the cement mixture to the top of the steeples, rising 200 feet above ground level, took three separate water pumps.) This process, known as “parging,” fixes the slates together against the wind, reducing chatter and damage from loosened slates. In the 100 years this is expected to perform, there will be numerous occasions of high winds from hurricanes and other tropical storms. Speaking of high winds and hurricanes, this job started in the spring of 1999 and was interrupted by two hurricanes seasons. As of this writing, the job is just preparing to get back into gear following nearly six weeks of tropical weather, most notably rainfall due to Hurricane Helene. Last year in the early stages of the job, all the planks of the scaffolding had to be removed to make way for Hurricane Floyd. Savannah was evacuated for Floyd, but he failed to show up for the event, opting for points north. That is a lot of scaffold planks, but if they had been left up during a direct hit by a hurricane, the results would have been disastrous.

The Cathedral renovation is expected to be substantially complete in time for a celebration already scheduled for November 29th. Lancaster is confident his part of the exterior retrofit will be completed well within that timeframe, and that most of the other work will be finished as well. The Cathedral job was extended when they decided to add refurbishing the exterior of the rectory building to the contract. When you stop to consider that this is a 100-year renovation, you have to take into consideration just how important this job really is, and how important your job as a roofing contractor can be when you are called in to this kind of work. Consider a few things. Allen Lancaster is a second-generation roofing contractor. The original roof was placed on this building roughly five generations ago. This fact alone makes his presence on this job special. Consider a few other tidbits. The first slate that protected this cathedral probably came from a quarry in the north, probably taken from the quarries by mule, cut by machine and cleaved by hand, and delivered by ship to the port of Savannah. This time, the slate was taken from a quarry up north. Except for the mules being replaced by artificial power, the process of cutting and cleaving is amazingly similar to that in the past. The new slate in 1900 was considerably larger than in 2000, but today it is on the way back up. What will the market for roofing, or the renovation of this building, be like in 2100? How will the slate be transported in a hundred years? Guess we’ll leave that up to Allen Lancaster VIII. Rick Damato is editorial director of Roofing Contractor. Published in Roofing Contractor, November 2000. 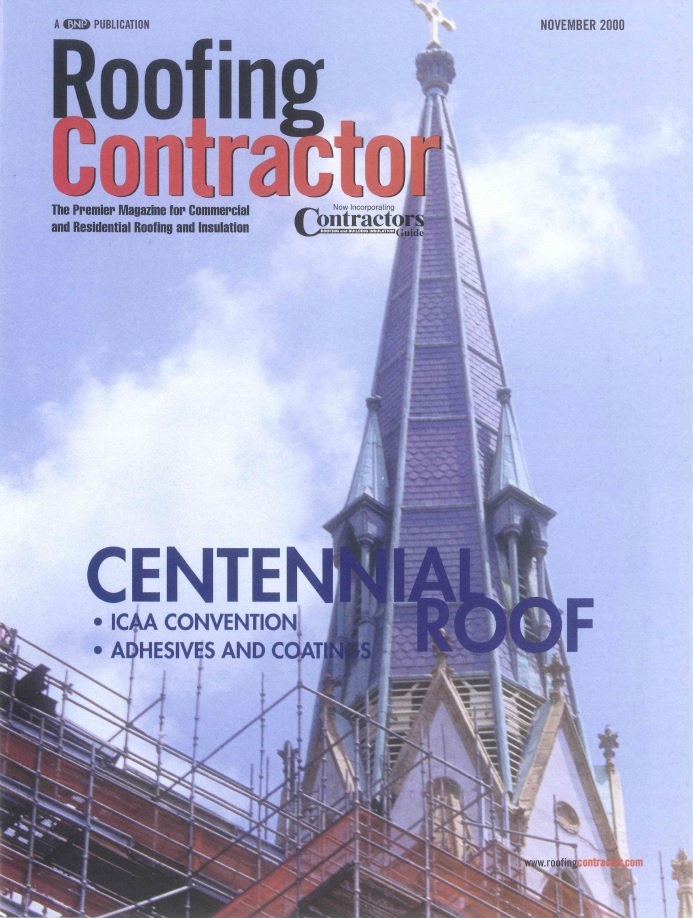