North Country Slate has serviced the Massachusetts’ slate roofing market for over twenty years through our exclusive distributor, The New England Slate Company. New England Slate in turn has long standing relationships with the premier architects and restoration professionals in the state, as well as with the best qualified slate roofing contractors in the region. With a long history of roofing slate use going back over 200 years and with thousands of heritage buildings, the Massachusetts market is discerning in the slate shingles allowed on these projects and the quality of installation methods and details employed to get them on the roof.

Our slate shingles have been installed on notable buildings and institutions across the state including numerous buildings at Harvard University and Smith College, Cushing Academy, Worchester Academy, Amherst College, Radcliffe College, and on treasured Faneuil Hall.

Our North Country Unfading Black slate shingles have been widely accepted as an excellent alternative to the no longer available Monson black slate that was so heavily used across the state in the last two centuries. Roofing slate production from this Monson Maine region ceased several decades ago but it is still valued as a salvage slate for repairs and additions on existing buildings.

Using original 19th century drawings, architects restored the Memorial Hall tower at Harvard University, to replicate the design created during its first erection in the 1870s. By Tammy Mastroberte

Despite numerous renovations over more than a century, the Memorial Hall steeple at Harvard University has not only survived time, but had endured fire damage as well. When first built in the 1870’s it featured a slate siding, and in time ornamental copper was eventually added. It remained this way until 1956, when the majority of the steeple was done in copper.

However, this same year, it suffered severe fire damage, and it was not until August 1999, that it received its final facelift. Chosen to face the challenge was the architects of Childs Bertman Tseckares in Boston, MA. Their job not only included the actual reconstruction, but they also had to choose which past-design pattern to follow.

“Five years ago, the firm did a study to find the steeple that was most appropriate to the building’s architecture, and we chose the second design,” said architect Jim McBain. “We modeled it after the second edition, with slate, copper and sandstone on the bell area, but we used a steel frame instead of the original wood.”

With the overall goal of replicating the second steeple’s appearance, the architects and preservationists researched both structural and siding materials as wellas their finishes. According to Dr. Judith E. Selwyn of Preservation Technology Associates in Boston, MA, by looking at the remainder of the building and review an extensive historical report, the intent of the original architect was discovered and followed.

With the exception of its copper rooftop and ornamental accent pieces, the majority of the tower is clad in polychrome stripes of slate. Adding up to almost 70 squares of roofing material, these sidewalls consist of North Country Unfading Black, Unfading Red and Unfading Green slate.

“We felt that the new fading green would fade to irregular colors and would not replicate the original intent,” said Selwyn. “The rest of the building still has polychrome slate roofs from 128 years ago, and we used photographs of what the building looked like to determine the colors we needed.”

Also keeping with the past-design, the buff-colored sandstone pinnacles were repaired and replaced where necessary. “We replaced 50 or 60 stones,” said Selwyn. “The ones with more minor damage were tooled back to a new surface, which left them slightly recessed. But if they were damaged more than that, they were patched or replaced.”

Another aspect considered was the stone finish. While taking the original design into account, the new design presents a slightly modified version. “Some of the material has a smooth or sawn face, and while some of the original stone has vertical tooling, we did not do that on all of the new stone because of both cost and time,” said Selwyn. “Since you see the tower at quite a distance, you can’t see the details of it.”

In addition to the surface appearance, the project also required that the stone and copper to be installed had to meet historic specifications. “The aspects of layout and details made it a difficult installation,” said John Marcone, project manager at Gilbert and Becker Co. in Boston, MA. “Because we were duplicating what was initially there, we had to work from the early drawings.”

According to Marcone, the slate was laid as shingle siding, and the pieces were 8 x 16 inches, with some cut to point. “The slate was installed using copper nails,” he said. “We used two nails on the top of each slate, and because of the way they were hung, you can’t notice them. With the shingle effect, the nails are not exposed.”

Gilbert and Becker Co. was also in charge of installing the copper roof and detailing. According to Marcone, the roof was flat-seamed and soldered, and the detailing was cut-to-size and bent. Installing both the slate and the copper simultaneously, the job took approximately three and half months to complete.

Now finished, the initial historical goal has been reached, according to Selwyn. “It’s terrific,” she said. “In a lot of ways, it looks like it has been there all along, and it is sufficiently high, so it is visible from great distances.” 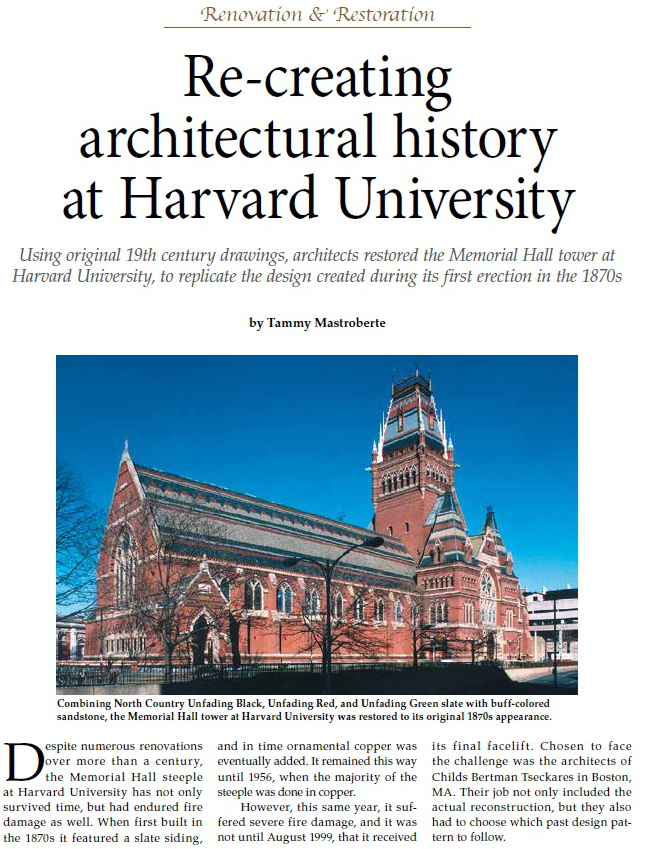 The imposing High Victorian Gothic building known as Memorial Hall sits immediately north of Harvard Yard on the campus of Harvard University in Cambridge, MA. Completed in 1878, it was originally built in honor of the sacrifices made by Harvard men in defense of the Union during the American Civil War. This summer the talented members of Roofers Local 33, Boston, MA, working for signatory contractor Gilbert & Becker Co., Inc., replaced the roofing at the polygonal Sanders Theatre-end of the building. They removed the original 1870s slate, which then had to be matched to maintain the integrity of the design of the hall, which was placed on the National Register of Historic Places in 1970. The three colors of slate came from Quebec, Vermont and New York.

After roof removal, Local 33 roofers put on all the required underlayments, which included ice and water shields and asphalt paper. Reference points were placed on the roof so they could replicate the original design of the tiles. The roofers were given 16 weeks over the summer for the project. Following an aggressive schedule that included lots of overtime and weekends, they completed it in just over 14 weeks. The timeframe and exacting standards were ambitious but achievable for the Local 33 crew. “I do a lot of slate roofs,” said project Foreman Tony DeMelo, “but this one was probably the most challenging yet.” The crew consisted of John Cuccinotta, Sean Newhall, Rick Foster, Jerry Ledeux, Nate Cuevas, Dave Cuevas, Jose Rivera, David Tracy, Kenneth Williams, Mark Lerner, Jim Szikny. After the scaffolding came down, it looked as if time had stood still for Sanders Theatre for nearly the last century and a half. Thanks to the talented workmanship of Local 33 Roofers, the slate roof is new and modern but looks just like it did in 1878. 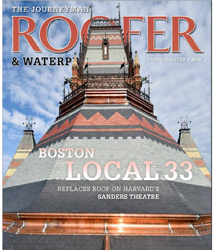