An S-1 rated roofing slate will provide a service life of 75-100 years!  A look at the old roof from 2016, shows some missing pieces and a few North Country Unfading Black slates have been used for some repair work over the years. It is clear that the roof was in rough shape and in order to preserve the beautiful 1864 church a new slate roof was top of the priority list. Our North Country Unfading Black slate, known for its smooth, rich black color comes from a high quality deposit of unfading black slate in the tiny village of St. Marc-du-Lac-Long, Quebec. We supplied 73 squares of 16” L x 8” W x ¼” as it was a natural match for the re-roof.

The St. Jax Church was formerly known as St. James the Apostle Anglican church.  Located in the heart of downtown Montreal, the church is a classic example of Gothic Revival style architecture with its grey limestone exterior and slate roof. Throughout the years, the church has gone thru various changes and by 2015 was closed down due to the expense of keeping it running. 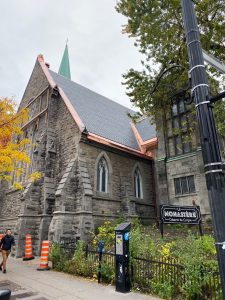 In 2018, partnering with Circus Cabaret show Le Monastère not only helped pay the cost of operating the church, but also a way to maximize the use of the church other than Sunday services. The church is also available for rent for events and community non-profit group meetings. 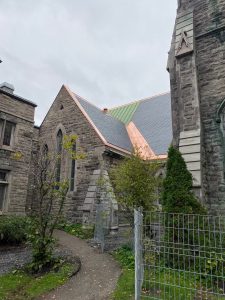 A qualified slate roofer will examine the condition of the existing roof.  In addition to looking at the slate, previous repair work, they will also look at the flashings, roof deck and overall condition of the structure to make sure its structurally sound to hold the weight of a new slate roof.  Quarter inch material was selected for the re-roof and weighs 900 pounds per square (1 square, covers 100 square feet of roof area). Budget will also play a big part in a new slate roof as well. 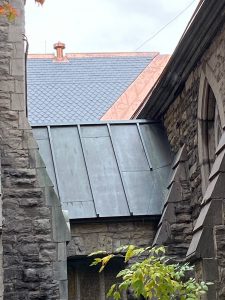 The St. Jax Church new slate roof, has the same unfading black pattern as the original roof with a scalloped slate pattern. The scalloped pieces were individually hand trimmed using a pattern.  When trimming slate into a shape, the slates are cut from the back side of the slate and cut with a guillotine slate trimmer which creates a chamfered edge. 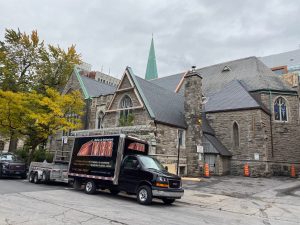 North Country Unfading Black slate is a premium-quality roofing slate offering a lasting roof for both new construction and restoration projects. This slate meets or exceeds ASTM requirements as an S-1 rated roofing slate which will last 75-100 years.