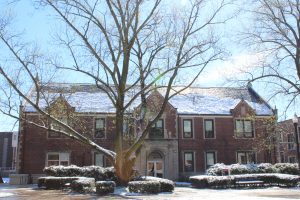 Northern Illinois University in Dekalb, Illinois was founded in 1895.  The campus sits on 756 acres and includes 64 major buildings.  The Still Gym, built in 1926 is among one of the first built on campus.  Originally a gymnasium from 1928-1957, now serves as the College of Engineering building.  North Country Slate has been providing natural roofing slate in the great State of Illinois for decades in both the restoration and new construction markets. We were proud to have our North Country Unfading Black slate (18” x 9” x ¼”) selected for the Still Gym re-roof which will provide a service life of 100 plus years. 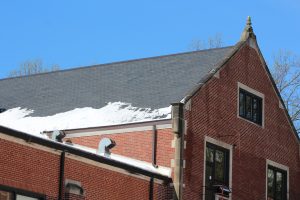 North Country Unfading Black slate, produced in Quebec, Canada has proven to be a beautiful and durable product. Able to withstand the Northern Illinois extreme weather from hot, humid summers to cool, cold winters and vulnerable to tornadoes, hail and snow storms. Roofing installers enjoy working with this premium quality roofing slate because of the smooth texture, rich black color and consistent thickness.