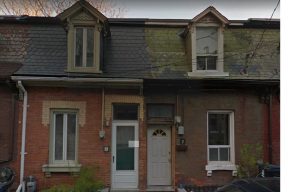 Toronto’s Percy Street also known as the “Republic of Percy”, is a private street in historic Corktown. In the early 1800’s Corktown was settled by working class immigrants, many from County Cork, Ireland.  These residents worked for the Don Valley Brick Works and Gooderham and Worts distillery. The average house is 13.5 feet wide, under 900 square feet with mansard roofs. 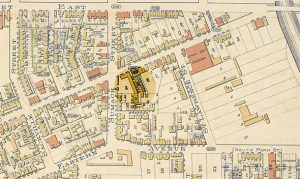 A walk down the street’s quaint row-houses is like walking down a street in a small town in Ireland.  Home to 35 residents, this tight knit community shares day to day chores and neighbours pitch in with the community garden.

The homes were built between 1885-1890, at a time when the City of Toronto was growing and railway development made transportation of products more accessible. Unaffected by freeze/thaw cycles, the blue-black slate from Quebec was a popular roofing material in Canada. 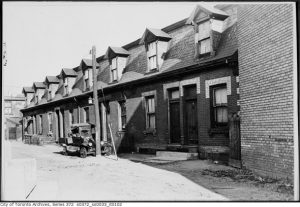 One of the benefits of owning a slate roof, is a few broken pieces can be repaired with S-1 rated, North American produced natural roofing slate, until the homeowner has the money to replace the entire roof. A knowledgeable slate roofer will be able to match the original slate by looking at the back of the slate as the face may have years of environmental pollutants or may have been painted. The roofer should bring a piece in so the size, exposure, shape, texture and weathering characteristics can be matched. Copper repair hooks and a slate ripper can be purchased for the repair work.  Replacing damaged slate pieces should be part of your yearly maintenance plan. 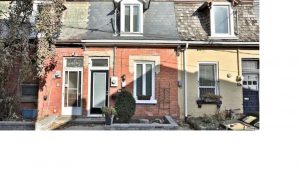 In keeping with Percy Street’s unique charm and protecting the historic homes, many owners have recently repaired or replaced the mansard slate roofs.  Thru the years, some have been replaced with asphalt shingles while others have painted the slate shingles. We recently supplied 1 ¼ squares of our North Country Unfading Black 14” x 8” x ¼” for the mansard slate roof replacement.  Some of these roofs have a unique pattern.  The hexagon slates in the picture were individually hand trimmed with a slate trimmer.

A big thanks to the residents of Percy Street for preserving these historic homes with a good quality slate. When installed with an experience slater, the slate roof will last another 100 years and will be appreciated by future generations.