A hundred and sixteen years after it was built in 1889, the Pulaski County Courthouse in the heart of downtown Little Rock, Arkansas needed a slate roof replacement.  Slate a durable and long lasting roofing product is also resistant to chemical pollutants and acid rain. Created by the forces of nature over 500 million years ago, a natural slate roof has a proven rooftop performance, unlike synthetic slate products in the market.  When sourcing roofing slate, there are several things to consider such as; North American produced, color, size, quantity required, availability and ASTM rating.  A good quality ASTM S-1 rated roofing slate will provide a service life over 100 years which makes it one of the best roofing materials on the market.

The Pulaski County Courthouse, was designed by architect and civil engineer, Max Orlopp Jr. who was a graduate of the U.S. Naval Academy at Annapolis. Orlopp was inspired by the Romanesque Revival style of architecture and designed the courthouse with rich-textured walls, spiral towers and asymmetrical designs.  He sourced most of the building materials from nearby Fourche Mountains. 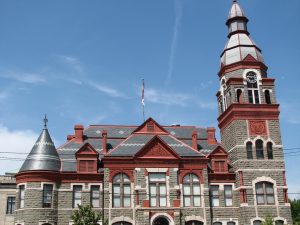 In 1961, the square clock tower was destroyed by a violent storm.  Due to the costly expense to replace the tower, the turret was leveled to the same height as the other towers. After years of campaigning, funds and grants were raised to restore the clock tower which was completed in 1995.

A grant in 2005 from the Arkansas Historic Preservation Program allowed for the slate roof replacement.  North Country Unfading Black was selected as the replacement slate.  We supplied 112 squares of the unfading black and 13 squares of the unfading green roofing slate for the pattern.  These slates have been tested and have received highest rating for Fire Resistance, Hail Impact and Wind Resistance.

For more information on our natural roofing slate products or project references please feel free to call us at Toll Free 1-800-975-2835.