North Country Semi-Weathering Gray/Black is a premium quality roofing slate containing shades of gray and black in subtle linear patterns.  A percentage of these slates will weather to tones of brown and buff over time.  Produced in Vermont, this slate meets or exceeds the ASTM requirements of an S-1 rated roofing slate and was a perfect match to the original slate on the historic Keystone Hospice house.

When replacing a slate roof and placing an order with a supplier/quarry you will need to provide the following information: 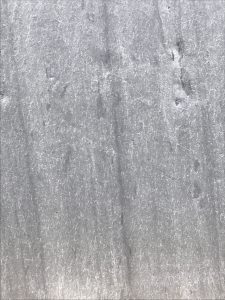 A slate’s color is derived from its mineral and chemical composition. Carbon produces the black and gray slates. As a natural product, each piece of slate will be slightly different with a subtle variation in shade, color and grain. The percentage of slate that will weather varies from quarry to quarry.  Weathering is a natural process, some slates may fade within a few weeks or sometimes years. When the slate pallets arrive at the jobsite, it’s important to sort and blend pieces to avoid blotches on the roof.

We supplied 70 squares of our North Country Semi-Weathering Gray/Black (Vermont Black) slates for the re-roof of the Wyndmoor, Pennsylvania Keystone Hospice house. Built in 1867 the house was first named the John Welsh House and then “Rauhala” which is Finnish for peaceful place. Added to the National Register of Historic Places in 1990, the house was purchased in 1997 by Keystone Care a non-profit home health care provider.