Belleville has some of Ontario’s finest 19th Century architecture. The Glanmore Mansion is the largest and most grand Second Empire Style building in Belleville with its yellow brick exterior, gentle concave curved mansard roof, with decorative ornate bracketed cornice along the eave side of the roof. The edge of the roof is finished with iron cresting and the dormer windows are finished with copper. This family home was built by wealthy banker John Philpot Curran Phillips and his wife Harriet in 1883. The Glanmore mansion remained in the family for three generations and in 1969 was listed as a National Historic Site. In 1971, the City of Belleville purchased the mansion and turned into a museum. 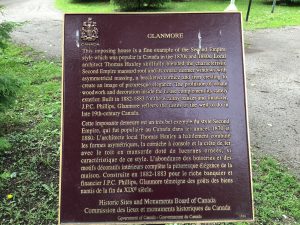 Second Empire was a popular architectural style in the latter half of the 19th century and early years of the 20th century. Originating in France during the reign of Napolean III (1852-1870), this style spread to North America and was popular in North-Eastern parts of Canada and United States in 1870s and 1880s. Second Empire architecture is frequently used on government buildings, railway stations, city halls, hotels and family residences. 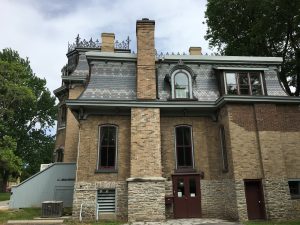 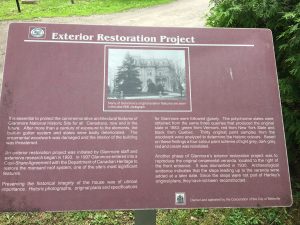 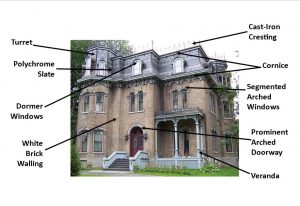 The Glanmore project was one of our first jobs supplying our North Country Unfading Black slate which is a high quality slate and tests strong S-1.  It has been compared favourably to the well-known black slate of Monson, Maine where slate from this region is no longer available.  The roof slate tile sizes supplied was 12”L x 6”W x ¼” thick slate and pieces clipped per specification. This slate roof pattern has 1.31 squares of Unfading Red, 6.74 squares of Unfading Green and 12 squares of Unfading Black. A 12” long slate when installed with a 3” headlap will have 4.5” exposure. Each square of slate weighs approximately 900 to 1000 pounds. A square of 12” x 6” slate roof tiles has 534 pieces per square.