Haverford College, founded in 1833 by Orthodox Quakers, the campus is made up of mostly stone buildings reflecting Quaker and Colonial architecture. The Magill Library, closed at the end of the Fall 2017 semester to prepare for a major renovation which included replacement slate for one of the original buildings and slate for the addition.  The library is made up of several buildings which were constructed over four eras; 1864-1898, 1912, 1941 and 1967. The historical parts of the library which include; The Philips Wing, the 1898 and 1912 additions will remain, while the 1941 structural stacks and a major portion of the 1967 building will be demolished and replaced with the new addition.  We were proud to have our North Country Unfading Black roofing slate shingles selected for this renovation project.

The Magill Library is the heart of Haverford’s campus. The renovation and new addition will modernize the building to meet the campus’ needs providing more spaces for events, social gatherings, classrooms as well as a café.  The estimated $33 million dollar renovation cost was made possible by the generous donation of 1983 alumni, Howard Lutnick, current CEO of Cantor Fitzgerald. His $25 million dollar gift was the largest single donation in Haverford’s history.  When the building reopens, it will be renamed the Lutnick Library.

Part of the slate specification stated “New slate meeting all requirements of ASTM C406, Grade S1. Slate must have a track record exceeding 75 years of durability with minimal deterioration in a severe freeze/thaw climate, Philadelphia area or northward.”  The field slates supplied were 101 squares of 18” length x 9” width x ¼” thick and 32 squares of clipped corners slates for the pattern. To put that into prospective, that is 6,816 pieces of slate that were individually trimmed! The slate specification called for holes to be punched and not drilled.  The Glendyne quarry that produces the North Country Unfading Black slates punches the nail holes to allow for a spalled countersink on face of slate to accommodate the nail head. Samples along with current slate test results were submitted and accepted by the architect. 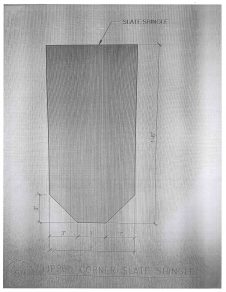 Clipped corner slates, produce a pattern on a slate roof.  These slates can be the same color as the field slates creating a subtle pattern or a different color, like an unfading red or unfading green slate to create bold roof pattern. When ordering special slate shapes, it’s important to include a drawing showing the desired shape and nail hole position.  On a larger scale production, an angled metal bracket is attached to the slate trimming machine.  On smaller jobs, a roofer can hand trim each piece using a heavy duty slate trimmer. 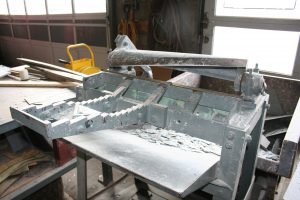 For more information on how to cut slate roof tiles, click on our May 2018 video.