Built in 1889, this grand 20,540 square foot brick Romanesque Revival building is one of the oldest farmer’s markets in the United States. The original slate roof was replaced with asphalt shingles 30 years ago to save money but  started failing in 2010. From 2010-2018, the community rallied together to raise $1.5 million to preserve their beloved market which included returning the roofing material to a historic slate roof thus insuring the roof lasted another 100 years. 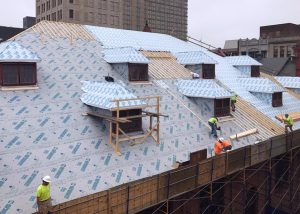 Members of the community bought pieces of slate for $100 or more and signed them, leaving their mark on the market for years to come.  The campaign “Sign a slate – a message that’ll last 100 years” has an Instagram page #raisetherooflanc showing people holding their piece of slate with various messages from vendor’s menus, to family names to marriage proposals. More than 700 donors collectively surpassed the “raise the roof” goal. 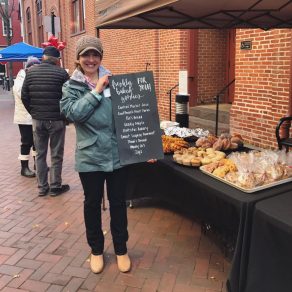 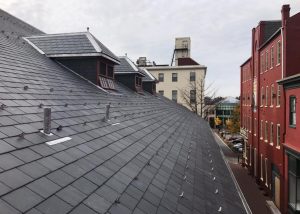 North Country Unfading Black slates quarried in Quebec, Canada, have been favorably compared, by industry professionals, to the best natural roofing slate ever produced in North America.  These comparisons would apply to the slates of Monson, Maine and the Peach Bottom area of Pennsylvania which are no longer available, and the well-known black slates of Buckingham County, Virginia. These slates have been supplied extensively across North America on universities, churches, courthouses, military bases and private homes. North Country Unfading Black slates meet or exceed the requirements of an ASTM S-1 rated roofing slate and have a service life in excess of 100 years.   It’s no wonder the people of Lancaster, PA selected this slate to ensure the roof on the market lasts 100 years.