When it comes to installing a slate roof or maintaining one, regular tools won’t do the job.  The three tools you will need are; slate hammer, slate cutter and slate ripper.  Just like slate has been around for a very long time, these tools have remained unchanged over the years.

The slate hammer is a multi-functional tool with a pointed punch end, nail pulling claw, cutting edge on the beveled handle neck in addition to hitting nails and installing slate repair hooks.  With proper care, the slate hammer will last a lifetime. Note, best not to punch slates thicker than ½” as it will dull the point.  Made of 20 oz forged tool steel with leather handle, is a heavier hammer which is needed for hitting the ripper when removing slate. 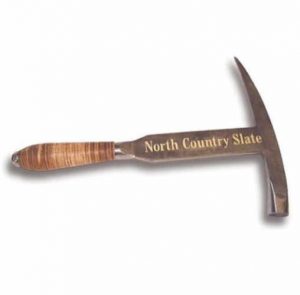 The slate cutter which is similar to a paper cutter crushes the slate leaving a chamfered edge.  The slate is always cut from the back and the slate cutter can make convex, concave and straight cuts.  There is a nail hole punch on the handle which is also punched from the back of the slate to create a countersunk hole on the face of the slate.  Weighing 5 Lbs with hardened steel blade and punch the overall length is 25” and the cutting blade length is 4”.

The slate ripper made of 3 Lb carbon steel construction with 24” taper ground blade has a reinforced handle to withstand the strikes of a harder hammer.  The slate ripper, used for repairs, slides up under a damaged or broken slate and the sharp curved end is designed to hook onto the nail shaft to remove the nail.

In addition to these three tools most slate roofers will have tape measures, chalk lines, leather gloves, repair hooks, copper nails in their tool belt.

For more information on our slate tools and accessories please visit our website.